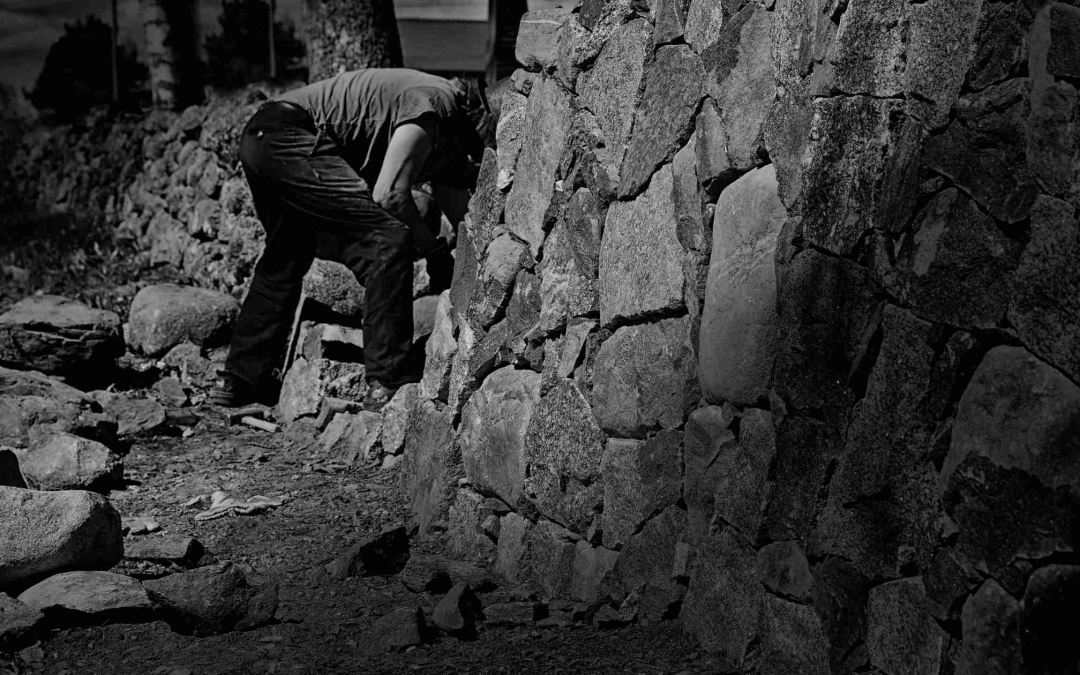 For more than 30 years I was a drystone mason, building rock walls without mortar. It was a very pleasurable, if somewhat arduous profession. The pace and cadence, visualizing of the outcome, handling of the stones and in the end, seeing a random pile of rock organized into the beautiful wall that is contained in every pile of rock. Every part of the task was pleasurable.

Everyone likes rock walls. There is something about the orderly arrangement of all the different shapes into a coherent finished product that pleases the eye. However, what we see is only “la cara de la pared” or, the face of the wall. Most people would assume that fitting together the stones to create the face is the most important part of building a stone wall. The truth is, while well-fit stones are important to the appearance of the wall, the most important skill is building a solid foundation. Unless the foundation is solid, the most aesthetically pleasing wall will not withstand the slightest stress. Indeed, a wall with a poor foundation will not stand long, with or without stress.

If you think about it, this is close to being a universal truth. Nothing stands for long without a solid foundation – buildings, careers, businesses, athletics – no matter what we want to achieve, we have to lay a solid foundation if we want results that will last.

Somehow, with all the fancy devices and elaborate training plans, the base has fallen by the wayside. “La cara de la pared” is too seductive by comparison, with the heavy stones hidden beneath the surface. But, the truth is, in order to improve your performance at any distance, be it 5 kilometers or 100 miles, first you need to be able to run that distance. Unintentionally, we did a little experiment with training this past summer. We held a “virtual” event that lasted for four months. Participants ranged from former Olympians to people who had never run in any organized event. Over the course of four months, the goal was to run and walk 1,000k, 1,000 miles, 2,000k or even further, if possible. Speed was not a consideration, just total distance covered. Running every day was encouraged.

With the racing schedule almost entirely canceled and many people trapped at home by shutdowns and quarantines, the response was remarkable. Some 19,000 people participated, in what became a grand experiment.

The first thing I found out was that runners today are putting in remarkably low mileage. It wasn’t just people who had never run 300 miles in a month; it was many runners’ first 250-mile month, or even 200. They were actually amazed to find out that those distances were not certain to cause crippling disability. Instead, distances that used to be difficult became easy, “10 miles used to leave me exhausted, and now I hardly even think about a 10-mile day.”

By the second month, people were beating their best racing times in training runs. Pure base work will not result in reaching your potential. But, the truth is, you would run better with a solid base and no finishing work than you would with just finishing work and a poor base.

By the end of the summer, more than 14,000 of the 19,000 participants had done over 1,000 kilometers. About 4,000 went beyond 1,000 miles. I won’t lie. Some people did sustain injuries from the high mileage. But the vast majority reported a range of health benefits, weight loss (or redistribution), lower cholesterol, blood sugar and a panoply of other baseline improvements. People were proudly reporting remarkable improvements in their annual physicals. And the lowered times continued to come in.

However, the real boom came about a month after the event ended. Runners returned to their normal “training plans” with all that base work in the bank, and the results were stunning. The one report that really said it all came from a runner whose lifetime goal was to qualify for Boston. He had, he said, never come close, and had about given up. It seemed like a time he would never reach. He was shocked when he made his last attempt…. and beat the Boston Qualifying time by more than 10 minutes.

“I will never do one of those 6-week training plans again. Instead, I am going to put in insane mileage for three months, and then do the 6-week training plan.” I don’t know if those training plans assume the runner comes in with a solid base, or if the assumption is that the runner would not be willing to put in the time it takes to truly achieve their potential. But the truth is, the newly-minted Boston Qualifier hit the nail on the head. When you are planning your training for the next target race, just ask yourself what kind of stonemason you want to be – the one who lays a solid foundation and builds something for the ages, or the one who puts all his effort into “la cara de la pared”?

This article was published in Ultrarunnimng Magazine (Dec 2020 / Jan 2021) edition. The contents on this post/website cannot not be reproduced in print or any other media without written permission.