Do the right thing. 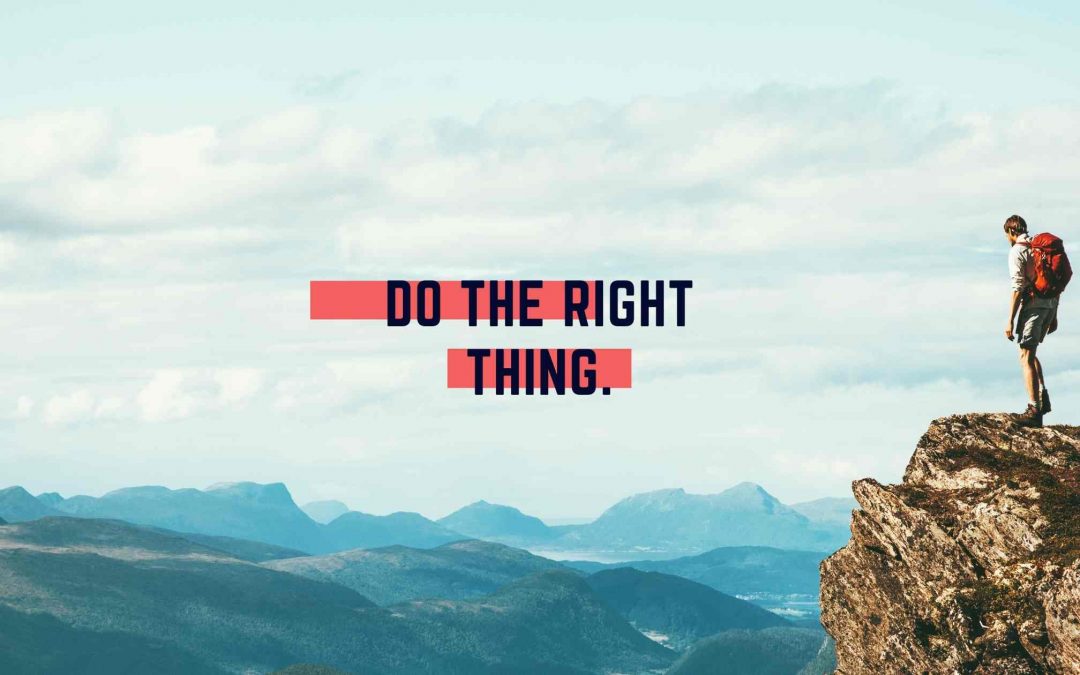 We don’t set our standards by what other people do.

This is what I was taught at home. It was drilled in me by my coaches growing up. These are the basic lessons I tried to impart to the kids who played for me.There is a lot of peace in those two simple lessons. Once they are integrated into your belief system, everything is easier.

Sometimes it takes thinking to determine what is the right thing. But not often. If I find myself thinking of justifications. If I find myself trying to argue the point to someone else; that means I already know it is not right. It is as if I think that convincing someone else will make what I know is wrong, right. Not that I make any claim to living an impeccable life. If anyone is above reproach I don’t even want to know them. And it is possible that I miss the mark by more than most.

The second one seems to be hard wired into us. Look around, read, listen, you hear it all the time. To fall back on the simple sports examples:

“We don’t humiliate a beaten opponent.”

“But, they were taunting us before the game!”

“We don’t set our standards by what other people do.”

“We can’t play Tony, he is too old for this tournament”

“But they play a kid who is the wrong age!”

“We don’t set our standards by what other people do.”

If you start to think about it; how much wrong behavior do you see that is justified with the words; “but, he…”, “but , she…”, “but, they…”. It is like it is hard wired into us. It is our natural response. We justify doing what we know is wrong, by what someone else did. As if that somehow made it right.

What happens, though, if we resist that temptation? What if we just do what we know is right?

Let’s look at this race. Out of all those people who entered, maybe 5% are never going to get out of Memphis. They will lose their focus. They will give up the first time they cannot enter their mileage. Life events will happen that none of us will ever know about. There are a million possible reasons they never get out of the starting gate.

Another 5% (and I think that is a way high estimate, but lets just use that number) are not going to do the right thing. They will put down numbers they should not put down. “Who will ever know?” Only them. Well, everyone will know, but whose knowledge counts except their own. There is nothing to win here. No records to set. Other than the respect of yourself and your opponents, what is there to win? And if you do not have your self respect, what difference does the respect of others make?

Here is a funny thing about people who don’t do the right thing. They justify it to themselves. And the only thing being confronted does is reinforce that justification.

“Well, if I am going to be accused of cheating, I ought to cheat.”

What is it I take from this? 90% (and probably more) of the people who entered this event are getting what they paid for. They are challenging themselves, they are having fun. They are swapping pictures of wonderful places to run all over the world. They are forming teams, and fighting off the buzzard… or chasing down the buzzard. What every person will get from this event is what they put into it. Not what they enter with their personal URL.

For me, this has turned out better than I dared to hope. Every day I find myself rooting for the people working their butts off to try and catch the buzzard before August 31. I thrill to look for my old friend Grant Egley, at 88, still plugging along on pace to finish. (If you have never heard of Grant, he is one of the founding fathers of modern day ultrarunning). I bask in the glow of so many people writing to say they have done things they never dreamed they could do. It gives me a glow when one of those “favorite route” pictures elicits the response; “I run there, too, we must be neighbors… pm me.” I am having a ball (and not coincidentally putting in more miles than I expected this summer). How lucky can a person be, to have an event where so many positive things are happening?

We said at the beginning, this is on the honor system. The catch in the daily entry post is to keep people from entering something ridiculously wrong. (the highest daily entry attempt so far was 3,208 miles). The three day window is intended for people to correct mistakes if they mis-enter, not so they can pile up days and enter them all at once. But we are not going to police you. We are not going to analyze your data to see if it is believable. We are not going to demand proof. Because nothing those few people do can take away one bit of what all the rest of you are doing out here. All those personal achievements, all the distances people never dreamed they could do. The fun and excitement of chasing a goal right out there on the limit of their ability (or maybe a bit beyond) and chasing it all summer long…. I am not going to let a handful of people cheating themselves out of all that fun ruin my summer. And I should hope you don’t let it damage yours. We are here to run across Tennessee all over the world, and have a summer of fun doing it.

And that is the last I have to say about that.